Stories English
IN TERRA VERITAS
On April 23, 1516, the Bavarian Beer Purity Law (Reinheitsgebot) was enacted by Duke Wilhelm of Bavaria. For this reason, "Beer Day" is celebrated every year on April 23. Reason enough to dedicate ourselves to this topic here as well. The at least 6,000-year-old history of the popular barley juice fills countless books and offers an almost unmanageable amount of interesting stories and details worth mentioning. But let's stay with the Beer Day, let's stay in Bavaria and take on a well-known topic: the internationally known Bavarian Maß! Or rather the Maßkrug!
Bottling of beer only began around 1900; before that, it was stored in barrels and tapped directly from the keg. Until the early 19th century, beer was mostly drunk together from large-volume mugs in the pub or in company. The variety of shapes of these drinking vessels for private use is almost unmanageably large. Numerous examples with different volumes can also be found in taverns of the Middle Ages and early modern times. For example, in the Nuremberg taverns of the 14th century, vessels with a four-pass rim and a height of about 20cm are known. 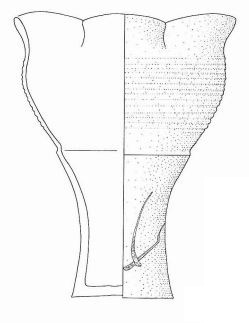 After the end of the 30 Years War and the economic revival of Kurbaiern in the 17th and especially 18th century, stoneware potters (called "Kannenbäcker") from the Westerwald settled there. They mainly produced bottles for mineral water, but also jugs, pitchers and mugs in the shapes of the Westerwald tradition. The pottery experts were also in demand as the need for drinking, storage and transport vessels increased. In contrast to the earthenware mostly used before, stoneware is waterproof and acid-resistant even without glaze. This is how the jug shape of the Rhineland first spread in Bavaria.
Around 1800, the development away from large-volume vessels toward smaller jugs began. It had simply gone out of fashion to drink together from large vessels. Each guest in the pub was to have his own jug. But legal and technical reasons also played a role.

Special development in Bavaria
Thus, the Bavarian stoneware beer mug developed in the kingdom from the Westerwald hump. And this one had clear differences. The jug wall pulls inward shortly before the rim, and the Kniebis and Red ornaments frequently applied in the Westerwald are omitted. This development took place demonstrably only in Bavaria in such a way. The original form of the vessel known today as the Maßkrug was formed.

Filling volume 1 liter
In addition to many different vessel shapes, there were also many different liquid measures. Between 1809 and 1811, the 93 liquid measures used in the Kingdom of Bavaria until then were standardized to the filling capacity of the Munich Maßkanne. This had a volume of 1.069 liters and was called "Maß" for short in everyday use.
In the further course of the 19th century, the industrialization of brewing also brought about changes in work processes and production volumes. Thus, the vessels are now also produced industrially with jug presses, cutting and kneading machines. Starting in the 1860s, the Maßkrüge were also labeled. This is how, for example, the famous HB for the Hofbräuhaus Munich came into being.
With the joining of Bavaria into the German Empire, the Munich Maßkanne is reduced to exactly 1000ccm on January 1, 1872 and since then corresponds to the now known measure of one liter. 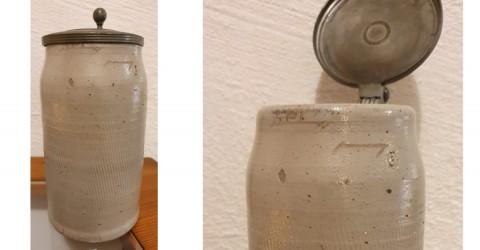 Bamberg beer mug with the 1.069 liter calibration mark and the imperial calibration mark of 1.0 liter from 1872. (Photo: Franconian Brewery Museum, Michelsberg 10f, 96049 Bamberg)
For a long time there was also no fixed term for beer drinking vessels, even though today we often speak of beer mugs in retrospect. At that time, terms such as Blützer, Fäßchen, Krugl, Schimmel and many others were used. With the Bavarian standardization of the filling content, the Maß literally also became the Maß and the Maßkrug.

Without lid
Until the 1880s, it was common practice even in pubs for the Maßkrüge to have a fitted tin lid. Therefore, due to the sharp increase in quantities needed, high production costs, and laborious cleaning of such steins, the assembly of lids was abandoned. These uncovered jugs were then called "Keferloher" in reference to the likewise lidless jugs of the Keferloh cattle market, even though these jugs held more than one liter (1110ccm) and also were not made of stoneware.

Keferloh cattle market
The cattle market in Keferloh, Upper Bavaria, had a very long tradition (documented since 1325) and was one of the largest regular gatherings of people in Bavaria until the middle of the 19th century, with up to 40,000 guests. In addition to the livestock trade, the annual event was known above all for the consumption of huge quantities of beer, which was served in lidded earthenware beer mugs. It was presumably from Georg Pschorr's (founder of the Hacker-Pschorr Brewery in Munich) circle that the idea came to call the unusual lidless earthenware steins "Keferloher" in reference to the tradition of the well-known Keferloher cattle market.

Markiert in:
Story of the Maßkrug beer Bavaria Maß Stein