Stories English
IN TERRA VERITAS
"In search of the taste of the Middle Ages - the way from the recipe manuscript to the finished dish. " This article is the start of the small series including re-cookable recipes.

The question "What does food in the Middle Ages taste like?" cannot be answered in general terms. Because a big role also plays who eats what, when and where?
In the search for the taste of the Middle Ages, it is first necessary to distinguish between the early, high and the late Middle Ages. The finds, documents and illustrations of the Early Middle Ages allow only a very vague idea of dietary and cooking habits of the time. For the High Middle Ages, there is already more and also detailed information around the topics of food and its preparation.

However, what and how was cooked - and then also eaten - can only be understood more precisely with our knowledge of the late medieval cuisine. It is already known from the early and high Middle Ages what animals, plants and also spices were available and what pots were used for cooking. But one very crucial thing existed from the 14th century onwards: Cooking recipes!

The recipe
How a dish actually tasted in the Middle Ages is very hard to reimagine. But it is possible to make it "tasteable" and for that you need the recipe. From the original, to the transscripted copy, to the translation into modern language.
The medieval cooks have described the most diverse recipes for lard pastries, pies, aspics, egg dishes and sauces. However, it is necessary to know and observe some peculiarities. For example, if it is called Mus (mush) there, it is not necessarily a porridge. The term mush was used in the Middle Ages to refer to food or meal in general. In the cooking recipes of the Middle Ages, the information for quantities and cooking times is also almost completely missing. Preparation techniques are often present but must be gleaned from the texts. Cooking and kitchen knowledge as a craft and/or domestic activity was passed on orally and not written down. At that time, not all ingredients were always available. Therefore, in the recipes there are tips and choices of ingredients. Alternatives are described and it is pointed out what can be omitted if necessary - without completely changing the character of the dish. There was therefore scope of action in the cooking. The rule was: you take what you have. 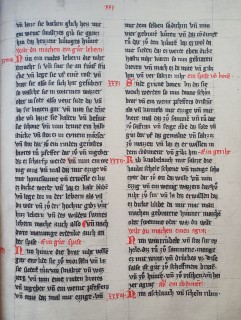 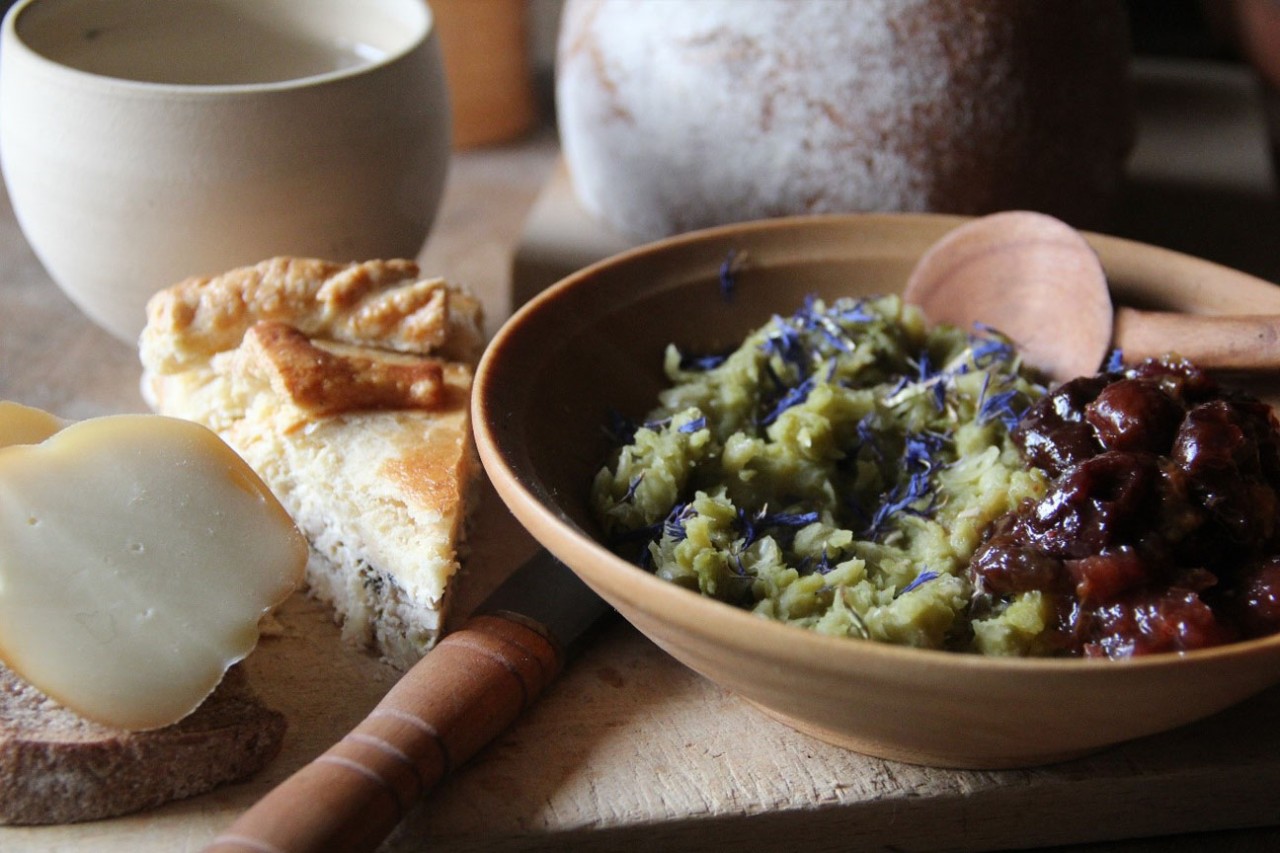 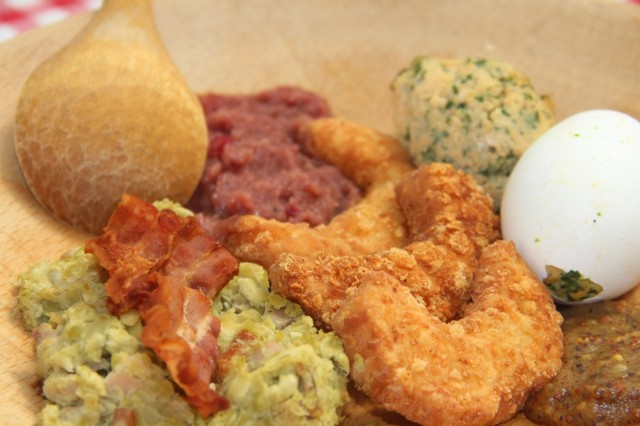 What came to the table: "Krumme Krapfen" (crooked doughnuts), crispy eggs and mush with bacon.

The preparation
In order for it to taste like in the Middle Ages, not only the original recipe is needed, but of course it must be cooked like in the Middle Ages. With the right ingredients (no more and no less) on a stove (with an open fire) and with the right cookware (ceramic pots, kettles, spoons and other household utensils).
In terms of cooking and kitchen utensils, everything was available that is still needed for cooking today. The pots, spoons, whisks, knives, bowls, jugs, storage vessels and the stove met the standard of their time and were fully functional.
The stove was an open fireplace. The fire was centered on the hearth and was fed with finger-thick wood logs about 30 cm long. This technique makes it possible to fire continuously and sparingly with flame. The earthen cooking pots, by far the most common cooking utensils of the Middle Ages, were placed against the hearth fire and turned at regular intervals. The radiant heat made them hot and the contents boiled. Kettles and pans were placed over the flame on a cooking rack. 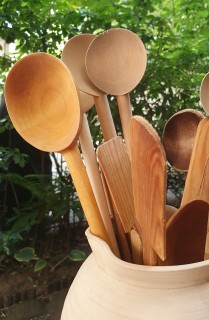 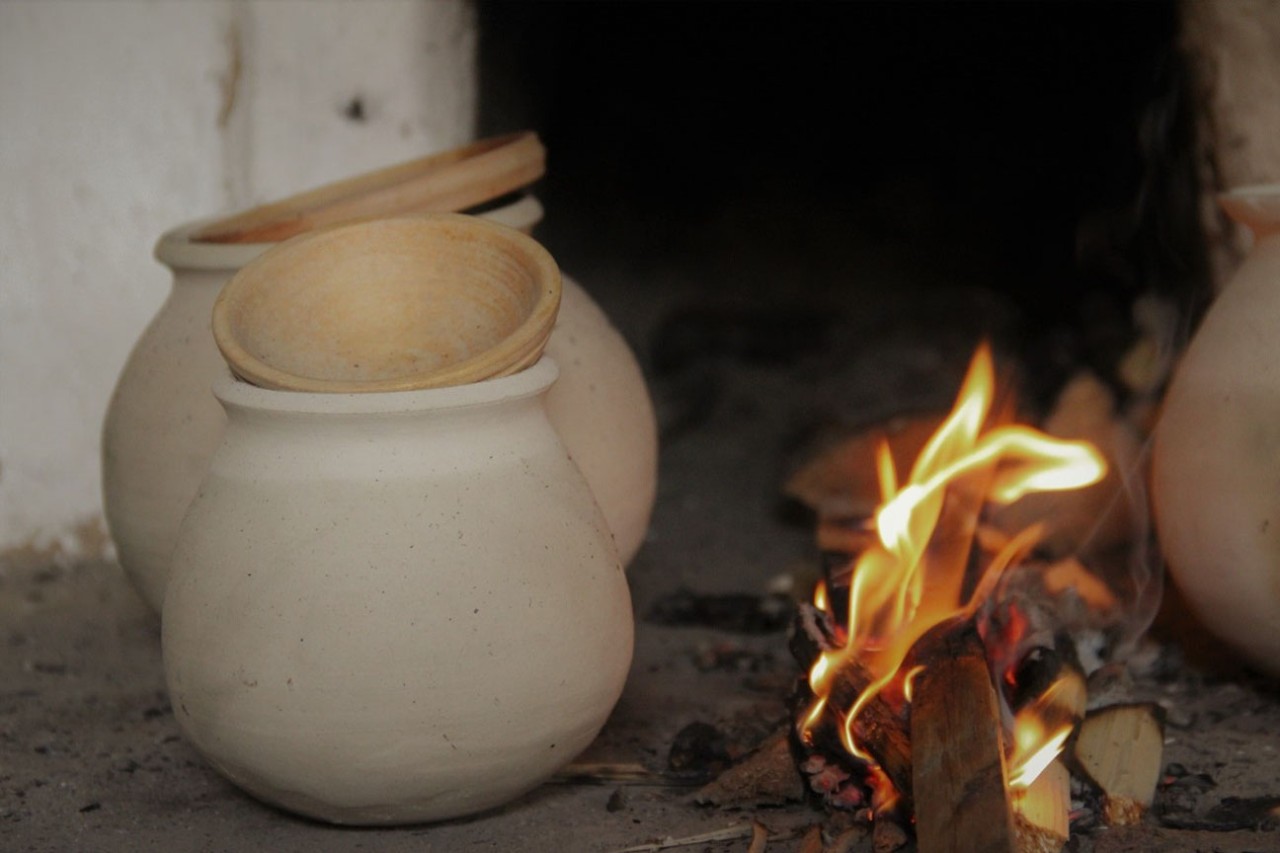 Spherical pots (replicas: late 13th century, Würzburg, Bavaria, Germany) by the fire on the stove.
The recipes describe a wide variety of preparation techniques, ranging from simple boiling or frying to sticking in a water bath. The estimation of quantities, the handling of kitchen utensils, the correct firing of the stove, the feeling for the right temperature and duration during preparation was a matter of course for the cooks of the Middle Ages. Whether at the castle, in the inn, in the city or in the village: the cooking result was not a product of chance, as is sometimes claimed. Those who cooked had learned their craft and were skilled. Medieval cooks were experts and professionals.

By our guest author Claudia Zimmermann

An original recipe to recreate
Based on the original recipe, each dish has a list of ingredients and a list of necessary kitchen equipment. The recipe presented here has been "translated" into contemporary cooking instructions and steps. Of course, the dish can also be cooked in a modern kitchen, even if the lack of medieval utensils and an open fireplace means that the original taste cannot be fully captured.
The following recipe is from the Rheinfränkisches Kochbuch (rhine-franconian cookbook) of 14451, which contains mainly cooking and baking recipes for Lent. It is assumed that the elaborately designed manuscript was commissioned by a cleric of the upper class from the Mainz area.2 The Rheinfränkische Kochbuch is not an independent book, but a section of an extensive work with further contents from the fields of astronomy, astrology and medicine. 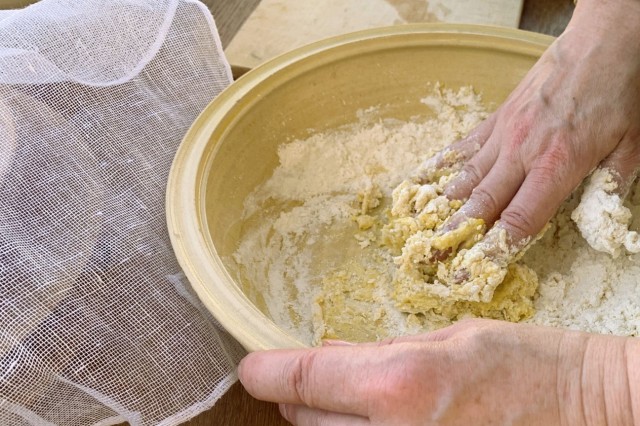 Make the dough from flour and eggs 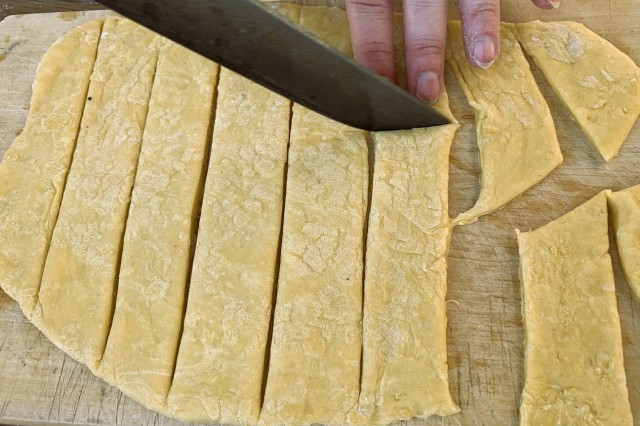 Cut the rolled out dough into strips 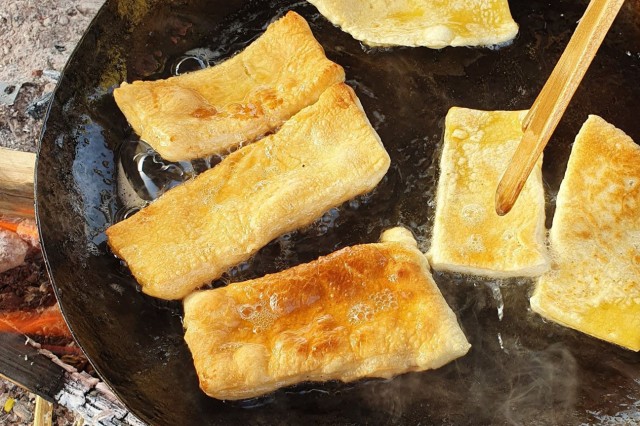 Bake in the pan 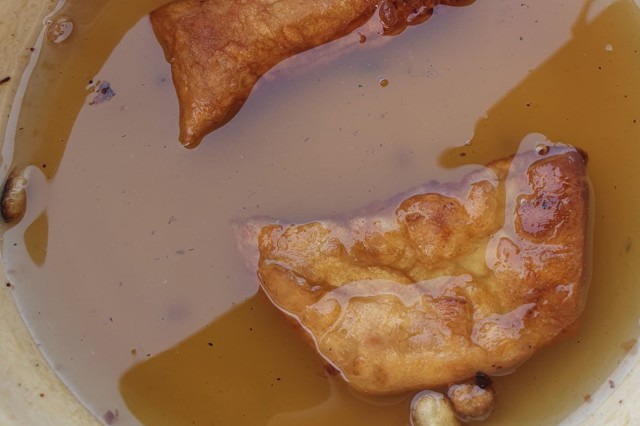 The pastry in the syrup bath 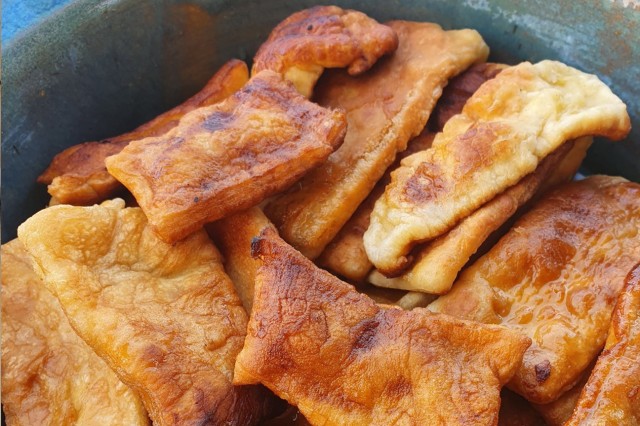 The finished pastry (without raisins)

Sources and literature:
1) The manuscript of the Rheinfränkisches Kochbuch is in the possession of the State Library Berlin and can be found in the (digital collection) Digitalen Sammlung unter MS germ. Fol. 244.
2) Thomas Gloning: Text, Übersetzung, Anmerkungen und Glossar, Ludwig Auer, 1998

Equipment:
Replicas:
- Cooking pots after finds from Frankfurt am Main, Germany
- bowls based on finds from Freiburg and Bad Windsheim, Germany
(all made by Anna Axtmann)