The Stone Age was named after the fact that people made tools from stone. But stone is not just stone, but a raw material of varying quality and grade. Thus, it was also a coveted commodity and was transported and traded by the Stone Age people over great distances. Today, archaeology can reconstruct through finds how and via which routes there were contacts between different regions. Franconia (a region in the north of Bavaria, Germany) is a good example of this.

In Franconia, more precisely in western Franconia between Rothenburg ob der Tauber and Hassfurt, only shell limestone chert and Keuper chert are present. In addition, there are siliceous slate nodules from the Main River. Unfortunately, these natural raw material deposits are rather inferior for tool production. However, archaeological finds of artifacts and raw material from the time of the first farmers and cattle breeders in Central Europe in the 5th millennium B.C. (Linear Pottery) show that the high-quality material was obviously obtained from other regions. Baltic flint, western flint and Jurassic hornstone were also found. The closest occurrence of Baltic flint is about 100 km away near Erfurt. Western flint can be located at least at the border to Belgium and the Netherlands, 300 km away (e.g. from Rjickholt). Even the Jurassic chert from the southern Franconian Alb has at least a journey of 80 km behind it. 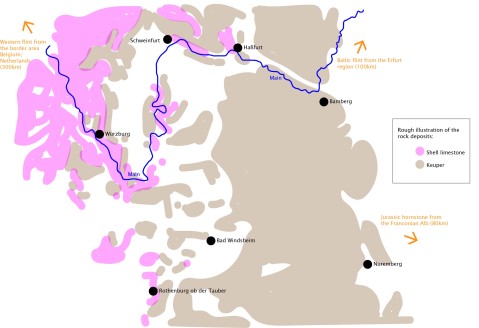 Rough illustration of the rock deposits in western Franconia

Reconstruction of a trade network
This alone shows that people must have transported high-quality flint over longer distances more than 6000 years ago. But even more interesting is the regional distribution and quality of the finds, which suggests a busy trade and transport network.
Comparing raw material deposits of Linear Pottery settlements in western Franconia, it becomes apparent that Baltic flint was mainly used in the northern part. In contrast, western flint and siliceous shale is only found along the Main River. This shows on the one hand that there were supply differences in the individual settlements and on the other hand that the Main was obviously used as a traffic route.
The Jurassic chert from the Franconian Alps appears only in the southern part of the area discussed here. 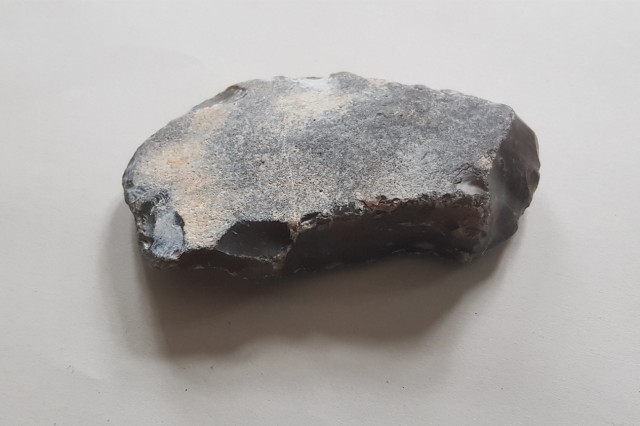 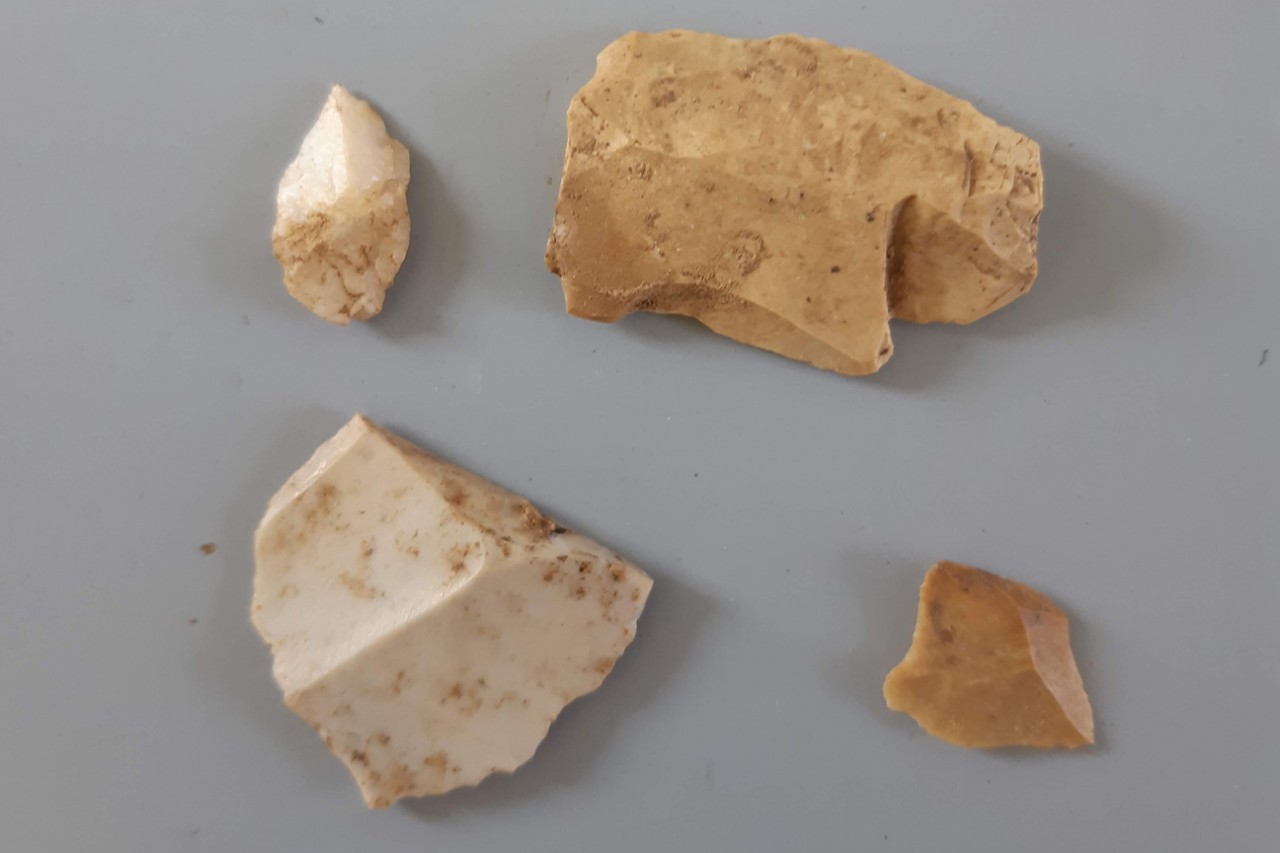 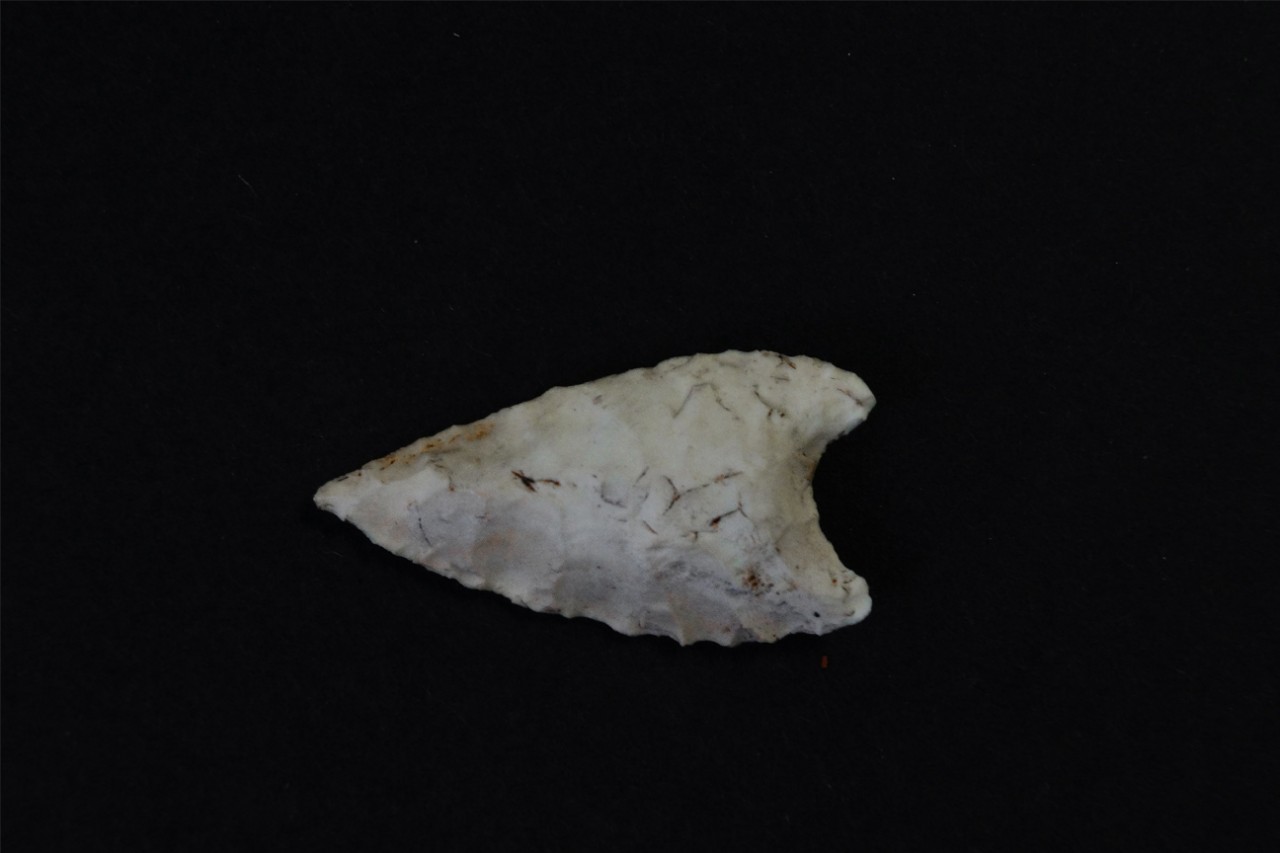 A Stone Age Economic System
It is also particularly interesting to note that as the distance of the settlements from the main transport route increases, the proportion of raw material found decreases. At the same time, however, the proportion of semi-finished and finished products, such as blades that are almost finished or ready for use, increases. Thus, it can be assumed that raw materials were received and processed in places close to the trade route. The resulting products were then transported to the more distant villages. However, these were not only the best blades, but also those that were made usable by additional processing. It shows that people at that time exploited all available materials, since the supply of chert and flints in western Franconia of the older Neolithic period was apparently rather poor.

Further development instead of standstill
In the following middle Neolithic period, the situation changes. On the one hand the use of western flint decreases strongly or ends completely. This development is not only noticeable in Franconia, but in the whole area of use of this type of rock. On the other hand, the so-called banded plate chert - which looks very memorable - from Abensberg-Arnhofen south of Kelheim is popular and mined on a larger scale. It is remarkable that the proportion of finds of banded plate chert does not decrease with increasing distance from the mining site. Perhaps this is an indication of a change and further development in an increasingly dense communication and trade network. 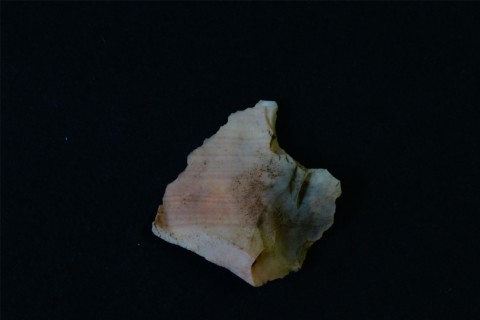 Knockoff of banded plate chert from Abensberg-Arnhofen. The plate chert is secondary burnt.