The "naval battles" of Bayreuth

Stories English
IN TERRA VERITAS
About 300 years ago, several warships meet each other under cannon thunder and enveloped in gunpowder vapor. The brave sailors on both sides work hard to maneuver the ships around their respective opponents and get into firing position. A scene you would expect to see somewhere on the world's oceans? No, it took place in this or a similar way in the middle of Bayreuth in Upper Franconia in the north of the German state of Bavaria over 450 kilometers from the coast.
For the people of Bayreuth, this story is usually not unknown. Crown Prince Margrave Georg Wilhelm (1678 - 1726) had once found great pleasure in seafaring during his cavalier journey through the Netherlands and England and did not want to have to do without it in his homeland. Just as a baroque and absolutist ruler with Versailles as his model would have wished.
WELCOME..

The Brandenburg Weyer
Already since 1508, the so-called Brandenburger Weiher existed north of Bayreuth's old town, in today's district of Sankt Georgen, which also housed an island. Crown Prince Georg Wilhelm began building his Crown Prince's Palace on the southern bank in 1701. Today, the building is located on Bernecker Strasse and is used as a correctional facility. In addition to the castle itself, the complex also included a theater, sailors' houses and other outbuildings, the main purpose of which was to house personnel and equipment for the crown prince's various entertainments. The palace and surrounding buildings were never referred to as part of an independent city of "Sankt Georgen" - probably so as not to alarm the citizens of Bayreuth, who would hardly have approved of the competition right outside their city gates. It was not until shortly before he took office as Margrave that he referred to Sankt Georgen as a town. 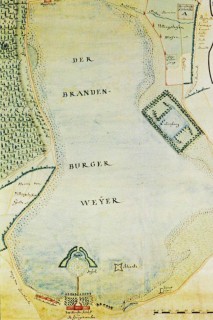 Naval battles for the crown prince
For his nautical ambitions, Georg Wilhelm commissioned local craftsmen from Münchberg and Wertheim. Over the years, they built several ships based on the Dutch model. The largest ship was the Neptunus. It measured 30m in length, 6m in width, 18m in height including the mast and held 12 small guns. On the small lake this remarkable sailing ship could be maneuvered only with some difficulties.
Of course, the sailors of the Crown Prince had to fight bravely against each other in the exhibition battle. The opposing side had dressed up as Ottomans for this purpose. Georg Wilhelm even had an additional "Turkish brigantine" built. Props such as Ottoman clothing and "slave chains" were also in abundance. Thus, the court society could fully immerse itself in the sea battles of the time around 1700. The crews had to maneuver the ships very carefully and slowly on the lake so as not to run aground or ram the shore. Despite all this, there were several accidents in which sailors died or fires broke out on deck. 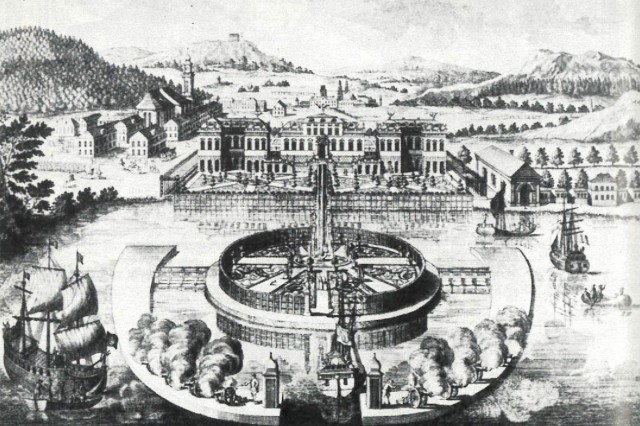 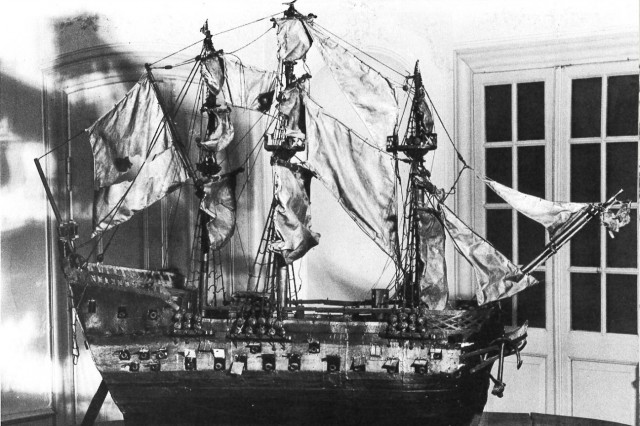 Only little remains
The island in the pond and the ships were also used as a background for fireworks, spectacles and other merrymaking. Even after Georg Wilhelm died in 1726, the grounds were still used for amusements of the court society. Several birthdays of Margravine Wilhelmine, sister of Frederick the Great of Prussia, were celebrated here. The Danish royal couple was also received here and a theater stage was erected on the ships. The last lake festival took place in 1771, by which time the castle, which had been renovated in the meantime, was already badly in need of renovation again, the island was overgrown with reeds and grass, and the lake had partially silted up. In 1775 the pond was then drained and the area was divided into plots. Until it was developed with industrial facilities, the area was used primarily as farmland. The castle itself is now a prison and the former princess house, which was used as a "lunatic asylum" in the meantime, now serves as a commercial building.

Names such as Inselstraße, Seestraße and Matrosenstraße (Islandstreet, Lakestreet and Seamenstreet respectively) in the Bayreuth district of Sankt Georgen still recall the lavish festivities of the Bayreuth Baroque and Rococo periods, which were attended by princes from all parts of Europe.