Stories English
IN TERRA VERITAS
To this day, the image of Stone Age hunter-gatherers persists. Brave men hunt mammoths, and the weaker sex is suitable at best for collecting berries. (It should be mentioned that gathered plant foods were equally important for the nutrition and survival of prehistoric and early historic cultures). This idea dates to the 19th century and is still ingrained in our minds today. But was it really like that?
That the people in the Stone Age lived on hunting, fishing and plant food is proven. However, the archaeological remains do not reveal who hunted, killed, or gathered them. Also the preserved weapons, like harpoons and spears do not give us any information about their users. Few conclusions can be drawn about graves and their supposedly gender-specific grave goods either, since too few reliable data are available. A gender-differentiated division of labor can simply not be proven archaeologically so far.

Where does the image of hunting men and gathering women come from?
The basis of the idea of gender-differentiated role distributions are ethnographic travelogues, such as those by Claude Lévi-Strauss. Many authors wrote from their patriarchal self-image and thus subjectively and judgmentally. The reports often painted a distorted picture and were based on the widespread role model of men as providers and women as housewives.

It was probably quite different
New ethnographic studies from Africa, America and Australia show that non-European cultures did and do have hunting women. In various pygmy groups, for example, men, women and children from five years participate in net hunting. Women here participate in hunting again just a few days after giving birth.
Archaeological research in North and South America revealed an almost equal distribution of roles. Of 429 Stone Age individuals examined, 27 could be assigned to the hunter role. Of these, 11 were female and 16 male! 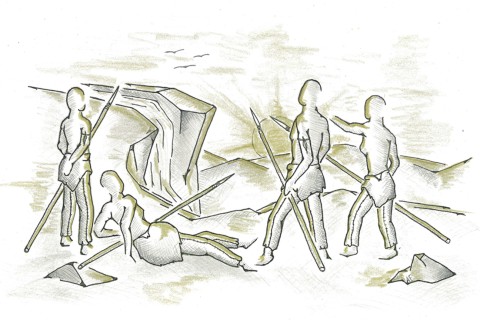 Outdated role models also influence the historical interpretation of other epochs. For example, in the case of Celtic princely tombs. Or should we rather speak of princess and princely tombs?
Although Celtic princesses have also been known for some time, as evidenced by the tomb of Vix in France, for example, burials are often judged by gender stereotypes. If, for example, a woman and a man are found in a burial chamber, it is inevitably clear that the man must have been the prince and the woman followed him into the grave. And even in the case of the princess of Vix, outdated ideas about what a woman should look like can be found in the pictorial reconstructions.

Archaeological gender research has been practiced in German-speaking countries for 30 years. However, this branch of research increasingly received public attention only a few years ago.

Have more interest in the topic?