»Countless feral cattle are rounded up in the steppe by cattle herders. Over hundreds of kilometers they drive them in huge herds to the big cities in the west to sell them there for profit. Some big merchants who organize these herd drives make a fortune in the process.« This account does not describe any aspect of North American history of the 19th century, but takes place in 14th century medieval Europe.

During excavations in Bavaria, archaeologists repeatedly come across animal bones and horns, mostly from pigs, sheep, or goats, but especially in cities, they also repeatedly come across the remains of cattle. It is interesting that many of these barks did not come from the region at all, especially in the late Middle Ages and early modern period.

The demand in Central Europe was great
The demand for meat in larger cities such as Nuremberg or Regensburg was enormous. So high, in fact, that it could no longer be met by the immediate hinterland. This circumstance was also due to the agricultural focus being on growing crops than ranching. Adding to that: the cattle kept here were considerably smaller than those of today. Bulls in the late Middle Ages had a withers height of about 100cm and a body weight of just 150-200kg. In comparison, today's Simmental bulls weigh 1300 kg with a withers height of up to 158 cm. Because of the general shortage of meat, the large trading centers such as Nuremberg, Regensburg and Frankfurt began importing cattle en masse in the early 14th century. But where did these herds of cattle come from?

The solution lay in the Hungarian steppe
In the 1240s, the Mongol invasion of Hungary resulted in a significant population loss, which is why the cattle there were able to multiply uncontrollably and soon formed large herds in the vast Hungarian steppe. Another advantage was that these so-called "Hungarian gray oxen" were a mixture of the originally native aurochs and a Central Asian breed brought in by the Magyars as early as the 10th century. Compared to the Central European cattle, these Hungarian cattle were much tougher, significantly larger and were thus able to survive treks of over 1000 km and still have enough meat to make the transport worthwhile. 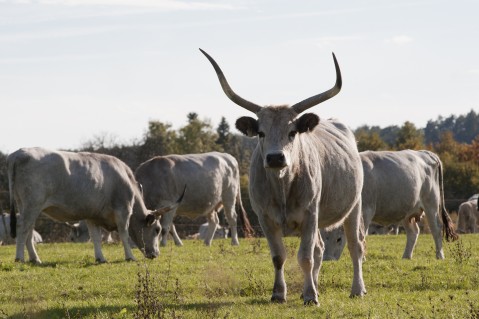 Cattle drive was lucrative economic activity
The Hungarian population took advantage of this economic resource. The animals were first housed in pens and then traded for cloth and other trade goods from southern German cities, especially Regensburg and Nuremberg.
The transport then took place in huge herds. About 200,000 oxen, cows and young animals were gathered by Hungarian ox-drivers (the "hajtó", from where the term "Heiducke" probably comes) and driven along the Danube to Vienna. There, Austrian and Bavarian herdsmen then took over the task of bringing the ordered cattle to their destination. The herd naturally became much smaller along the way. Hundreds of animals were sold on the way, ceded as customs to the respective sovereign or died in accidents. In Nuremberg, for example, about 70,000 cattle still arrived each year in the 16th century, which covered the city's needs. The enterprise was organized by large merchants. In the case of Nuremberg, these were mainly the Holzschuher and Thumer, who maintained a lively trade with Hungary and imported metals as well as cattle.
It was not until the course of the 18th and 19th centuries, with more intensive cattle breeding in southern Germany, that the demand for meat was again increasingly met regionally. Nevertheless, cattle continued to be imported into Germany via Austria. However, the patricians from Nuremberg were no longer involved in this.