Nuremberg Bells for the New World

Stories English
IN TERRA VERITAS
Since the 15th century there is a proverb that still today many know, especially in Bavaria: Nürnberger Tand reist durch alle Land, which means "Nuremberg trumpery travels through all lands" And indeed, as a manufacturing and market place for all kinds of goods, Nuremberg was one of the most important centers in Europe in the Middle Ages and the early modern period.

For example, a certain Ulrich Schmidel from Straubing was in the service of the conquistadors in South America between 1534 and 1554 and helped to enforce Spanish interests. In the process, he came into contact with the indigenous people living along the Paraguay River. The enterprising Schmidel traded knives, paternosters (rosaries), shears and other goods from Nuremberg for gold.

Also cylindrical tubes made of sheet brass were deposited in the graves of high-ranking persons of the Cuban society in the cemetery of El Chorro de Maíta, which was used from the 11th to the 16th century. They come from nesting tips from Europe and were most likely made in Nuremberg. 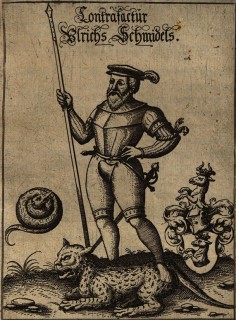 Nuremberg Bells in the New World

Nuremberg craftsmen produced goods of excellent quality and the city's merchants traded not only with neighboring regions, but also with faraway countries. Goods were already shipped to the - at that time still brand new - "New World" via the Netherlands. One of the Nuremberg products enjoyed great popularity worldwide: the bells. In North America, specimens of these small bells from the 18th century have been found. Based on the maker's mark, they could be identified as products of the workshops of Jakob Christoph Zimmermann (+1679), Wolfgang Zimmermann (+1728) and Johann Wilhelm Taucher (+1814) from Nuremberg.

Nuremberg bells overseas can be divided into two types, which were produced in different ways. The older type 1 appears in the south of today's USA, especially in the Mississippi Delta from the 16th century onwards, and were made from two chased brass sheet halves. Type 2 bells consist of two cast halves and are found from the 17th century onward. Their walls are much stronger, and the outsides usually show heavy turning marks and faceting due to filing. The stronger wall and smaller diameter gave them a higher pitched sound than type 1 bells. Mark Howell concludes, based on analysis of the Mississippi Delta bell finds, that the change in production was due to buyers' preference for higher pitched sounds. 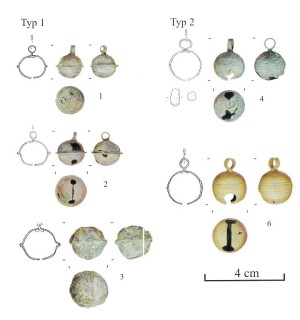 Types of bells (Quelle: Cassitti 2021, Taf45, 1.)
Nuremberg bells spread through the major trading centers in the southern United States and far into the hinterland, where they were used as a medium of exchange, jewelry, and musical instruments until the 19th century.