There is a persistent myth that in the Middle Ages, at best, people slept on a straw sack on the floor and covered themselves with their cloaks. But dozens, if not hundreds, of illustrations in medieval manuscripts show elaborate bed constructions with furnishings that are familiar today. But how was such a late medieval bed exactly constructed? A look at the sources and an attempt at reconstruction will provide an answer.

A closer look at the historical illustrations, past the colorful and often patterned pillows and quilts in all colors, occasionally white edges and tails still appear. But whether these are mattresses, sheets or eiderdowns, is difficult to tell today. The illustrations are literally only superficial.

What people lay on, what it looked like underneath, and how the beds were constructed, is what a completely different type of written source gives us information about: inventories and wills. These document factually and soberly what else belongs to a bed besides the visible pillows and blankets. 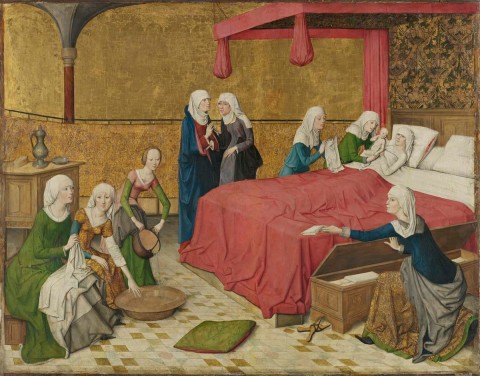 What the historical sources tell us
The proposal for a reconstruction presented here, is based on information from a dissertation on the material culture in the Lüneburger Testamenten (Luneburg wills) between 1323 and 1500.1 These sources are also particularly interesting because they include the estates of some servants, farmhands, craftsmen, and also generally of townspeople without certain rights.2 Likewise, in addition to family members and acquaintances, there are also servants and maids among the beneficiaries.3 Thus, the Lüneburger Testamente provide a glimpse into the chambers and parlors of the lower class and lower middle class of a late medieval city.4
It becomes apparent that sleeping in a bed, with all that entails, was the norm in all classes of the population. And the textile equipment of the citizens' beds was also rich: straw sack, eiderdown, cushion, pillow, sheet and blanket. Occasionally, the wills also make statements about material, quality, and color.5

The structure of a bed is largely logical and self-explanatory. It goes without saying that the straw sack must be at the bottom. And that the blanket and pillow are at the top - no different, as today - due to their purpose. But what about the sheet and eiderdown?

In the large imperial fitted bed in the "Green Chamber," therefore, a straw sack lay at the very bottom. On it two feather (under)beds, followed by four (2 pairs) linen sheets. On top of that a cushion and two pillows and finally a blanket. There was a curtain around the bed and low benches stood on either side.6 However, Tucher does not only describe the emperor's chamber. He inventories almost the entire imperial castle. More than a dozen other (sleeping) chambers, along the corridors and stairways. Among them also those that were assigned to the service staff. In all of them, in addition to tables and benches, there are always fitted beds with at least one under-bed, a pair of sheets, cushions, two pillows and a blanket.7 Along the sides there were also always low benches.
In the case of the sheets, it is assumed that one was used to cover the underbed and the other was used as an overlay for the blankets.8 Thus, one slept between the two linen sheets.
The Nuremberg poet and master singer Hans Folz (1440-1513) also reports in his Hausratsbüchlein (household book) about straw sack and mattress, blanket, pillow, cushions and linen cloth, in the fitted beds of the Nuremberg citizens.9
In summary, it can be assumed that people in the late Middle Ages all slept in beds of the same kind. Whether emperors, servants, burghers, servants or maids. Only the quantity of underblankets and pillows and especially the quality of the materials used differed.

A reconstruction
The proposal of a reconstruction of an ideal-typical bed as it might have stood in the bedchambers of late medieval houses.10

The base of a bed construction was the bedstead with a grid made of wooden slats or stretched ropes (also belts). Directly on it lay a straw sack, which was covered with an underbed. This was probably a mattress filled with down/feathers. 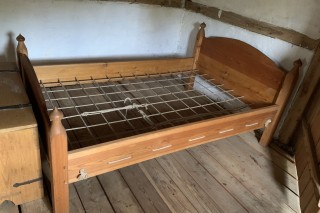 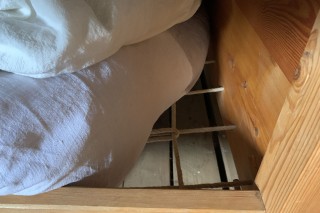 The sheets were spread over the straw sack and the underbed (mattress), which were two linen cloths joined in pairs. It is assumed that one of the sheets was used to cover the bed base and the other was used as a cover sheet for the blanket. 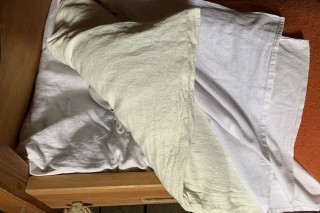 The sheets of medium weight linen, are cut from a web about the width of the bed and hemmed only at the two ends.

This term refers to more or less bed-wide upholstered cushions that were placed at the head end of the bed, and thus under the upper back, to create an elevated lying position. One can almost speak of a kind of sitting in this case. However, in the 15th century this sitting angle began to become flatter, so that an increasingly horizontal body position became possible. Depending on the width of the bed and the desired lying height, the number of cushions varied. 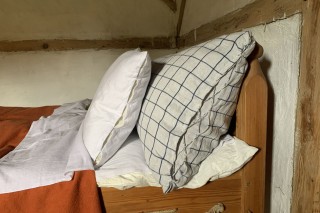 The cushion used here is a long rectangular ticking made of strong linen and filled with feathers. The pad is in a cover made of linen twill with a woven pattern. On one side the cover is closed with a cord.

The pillows turned out smaller than the cushions and lay in front or on top of them. The sizes were different. The smallest were at the top. It served as so-called head or cheek pillows to support the head and had representational function.

This probably meant one or more blankets protected by overlapping linen sheets. Mostly made of wool, more rarely of silk, fur or - similar to the underblanket - filled with feathers. Quilts filled with feathers probably served primarily to protect against the cold. Materials such as wool or silk, on the other hand, were also objects of representation. 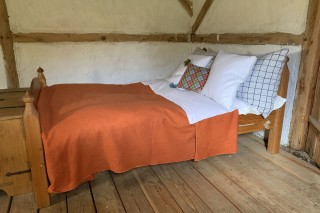 The three pillows used here contain square, feather-filled tickings made of sturdy linen in two different sizes. The two large pillows have plain covers of white linen and are closed only with a few backstitches. The smaller cheek pillow is also in a linen cover, but it is embroidered with wool yarn on one side and has tassels on the four corners. It is closed with a cord. The blanket used here is made of virgin wool dyed with madder in tabby or plain weave.