Stories English
IN TERRA VERITAS
The reporting and documentation of military conflicts has always been of particular importance, as they often represent key events in the course of history. In most cases, military operations from modern times have been handed down or archived in detail. However, the Battle of Hussitenbierl in the Upper Palatinate of the late Middle Ages has not only been well handed down, but also represents a significant historical turning point that is almost forgotten today.

The Aggression of the Hussites
September 1433: Hussite troops under Prokop the Great besiege the Catholic stronghold of Pilsen. Prokop had assembled a large army for this purpose. However, he was plagued by supply problems, because such a large army always needed supplies of food and material, which were not available in sufficient quantities in Bohemia. To overcome this shortage, he sends a larger part of his troops across the Bavarian-Bohemian border to plunder the enemy territory. A tactic that has proven very effective in recent years, because on the one hand he can supply his own forces and at the same time harm the enemy.
Captain Jan Pardus of Hrádek and Captain Jan Rítka of Bezdedic are sent across the border with 500 mounted men and 1,400 infantry. At the beginning of September 1433, they reach Cham and plunder the town despite fierce resistance. They then turn their attention to Obermurach Castle, which they try to capture, but fail. They also fail to conquer the town of Nabburg. However, during their plundering campaign they manage to drive a large number of cattle with them, which could be observed from Neunburg. Presumably they try to rejoin the main army and deliver the rich booty to the field kitchen in front of Pilsen.

Hiltersried in the present-day district of Cham,
Upper Palatinate, Bavaria.

Upper Palatinate resistance
At Schwarzenburg Castle near Rötz, Count Palatine Johann and Heinrich Pflug von Schwarzenburg gather an army from the Upper Palatinate knighthood, the Böcklerbund and peasants from the surrounding countryside. The commanders are always well informed about the movements of the Hussites and try to confront the enemy despite their inferiority. 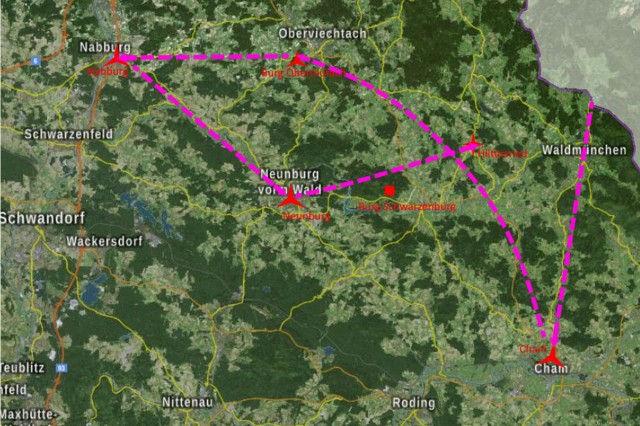 Campaign 1433, Hussite raid under Captain of Hrádek and Captain of Bezdedic in September 1433 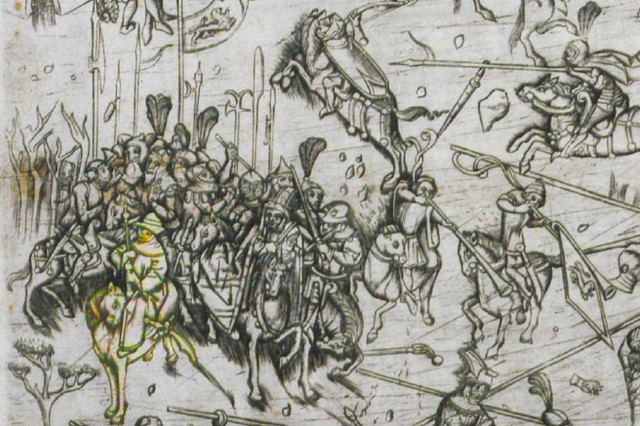 Detail from the copperplate engraving "The Great Battle" 1433. Highlighted: Heinrich Pflug von Schwarzenburg in the central section of horsemen

The battle
On a hill to the northeast of Hiltersried, subsequently called Hussitenbierl, the Hussites took up their position on September 21, 1433, in the form of the well-known wagon castle. Details of the battle are handed down with the song "Vom Hussenkrieg" by the battle participant Ott Ostmann, who died a little later from his war wounds. In the 14th stanza Ostmann describes Heinrich Pflug trying to convince the other knights to attack the Hussite wagon castle "...Der senk seinen spiess und eisenhut, reit' als frischer helde!" (He shall lower his spit and iron hat. Ride as a new hero!) Knight Wilhelm Paulsdorffer von Kürn and his horsemen finally attack the Hussite positions under heavy fire and manage to penetrate the wagon castle and capture the Hussite field flag (panier with goose motif). However, due to the strong Hussite resistance, they lose it again. In a second wave of attack, knight Fritz von Wolfstein and his horsemen set out after them and managed to free Paulsdorffer's trapped and heavily decimated unit and ride out of the wagon castle with the Hussite field flag. The importance of the battle was so great for the Upper Palatinate and the Catholic world that a depiction of it was made as one of the earliest copperplate engravings ever.

Further clues to the course of the battle are provided by the written records of Andreas von Regensburg, which also reveal much about the military structures. For example, the cavalry was divided into five units:

- a central cavalry unit with the banner carried by Wilhelm Paulsdorffer

- to the left of the banner Georg von Mistelbeck

- on the right Fritz von Wolfstein

- behind Hans Vingerl each with their knights

Where the infantry was placed cannot be read from the text. The leader of the archers was Georg Heyraus, whose father fought as a horseman in the rear cavalry unit.

Of historical importance
By blowing up the wagon fortress, the superiority of the Hussites was defeated. Only a few of them left the battlefield alive. With this defeat, the fortunes of the Hussites finally turned. Although there were still more battles in the following months and the last battle of the Hussite Wars would not take place until eight months later on May 30, 1434 near Prague, with the Battle of Hussitenbierl near Hiltersried the Hussite formations lost their threat potential outside Bohemia.